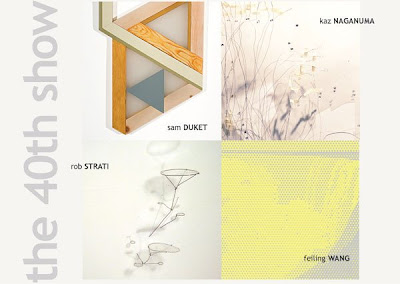 Roanna Forman, a local art critic with the New England culture magazine artscope, recently commented that, "The exhibits at artSPACE@16 are consistently intelligent, innovative, and challenging to the viewer. This gallery works hard to showcase new artists. Furthermore, it has been a cultural force, with enriching repercussions throughout the area."

The 40th exhibit at artSPACE@16 is scheduled to open to the public on Saturday, June 30 with a potluck reception with the four participating artists from 2 – 5pm, an artists’ talk will begin at 3pm. 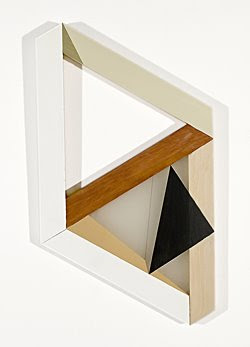 Sam Duket is an artist living and working in Pawtucket, Rhode Island. His work and livelihood are as much the product of an accomplished carpenter as a practiced painter. Trained as a painter at the Massachusetts College of Art, where he graduated in 2003, Duket’s work is rooted in strong studio practice and increasing dependence upon woodworking technique.

In his solo presentation, “Drawing in Two Parts”, Sam Duket presents recent series of works utilizing poured resin as a luminous support for many typical drawing mediums begun in 2005. From there, Duket has used the translucent panes to highlight the structure of his pieces. The combination of a paintings illusionism and the explicit and physical nature of the supports provide a sum of a much greater impact than its parts. 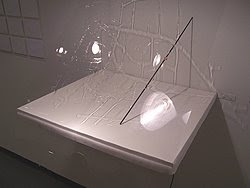 Kaz Naganuma creates a drawing-like installation, in which he frequently uses paper, polyester, wires, and most recently light and sound. In the exhibit, Naganuma stages a multi-disciplinary site-specific installation “Malden in Translation”, it being a part of his walking/translation series, in which he explores the presentation of effects of the ephemeral (namely experience) through walking around specific locality, using the process of translation.

Naganuma was born in Kofu, Japan and is presently based in Cambridge, Massachusetts. His work has been exhibited nationally and received numerous awards. He received a BFA from Massachusetts College of Art and a MFA from Maine College of Art. He also holds a graduate degree in City & Regional Planning from Cornell University. During this year his first international exhibition is scheduled in Barcelona, Spain. 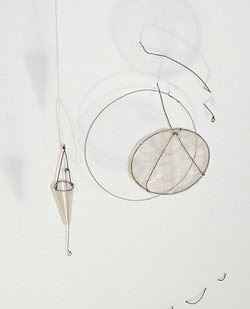 Rob Strati’s new work continues his exploration of the articulation of space and how we are perceptual in relation to it. Using subtle lines of wire, he seems to map spatial realities that speak to the underlying structure of things like dimension, measurement and the relationship between what is observed and the mental processes that are engaged in conceptualizing observation.

Strati was born in Boston, MA, and grew up in Columbus, OH. He is currently relaxing as best he can in the small town of Westerville, OH. Strati has a degree in Art History and works as a User Interface Designer for AOL. He is deeply engaged in the process of perception and how human consciousness interfaces with material and conceptual experience. Strati’s exhibition “Structural Harmonics” in Four-in-One is his first exhibition in the Boston area after a 36 year absence, he has come back to draw anew on some rather exceptional walls. 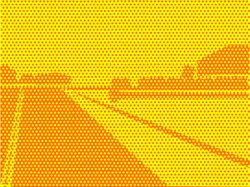 Feiling Wang’s new series, “American Landscapes”, is a result of his recent experiments in image making involving the rendering of familiar and prototypical American landscapes into new imagery to deliver unexpected optical effects. The process starts with manually arranging and overlaying individual colored dots, without digital manipulation, on a computer screen until an apt effect is achieved. The dichromatic image is then transferred to canvas using inkjet technology.

Wang is a physicist by training with a postgraduate degree from the University of New Mexico. Creating art work has been an endeavor throughout his life, parallel to his scientific pursuits. He has exhibited his artwork in various group shows in China and in the U.S., including two previous group exhibitions at artSPACE@16. His paintings were shown in his solo exhibition entitled “Invisible City” at The New Art Gallery in Boston. 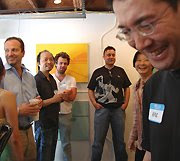 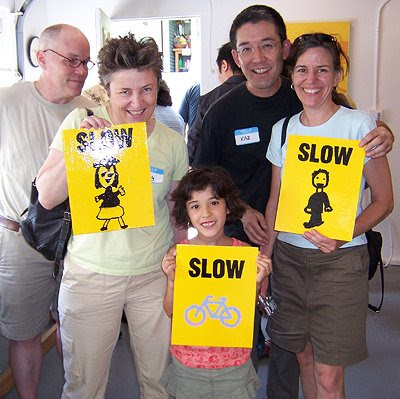 Walking may appear to be doing nothing. However, the slow pace of walking is creative. Walking in the city is an activity that invents a language necessary to invent a new place. It is the most telling way to be in touch with the earth and fellow humans.

Everyday space is a vast formless chaos that we cannot explain but only can be in it and with it. If we slow down and look at it carefully, we can see that no one is for oneself without being for others. And we can see that we are singular points of meaning.

To honor the creative potential of slowness, I made “slow” signs with images most of which had been generated by my daughter, Julia.

The “slow” sign is for sale for $10 each. The entire proceeds contribute to artSPACE@16 to support its commitment to non-commercial opportunities for artists.

Thank you for your support.

This exhibition is supported in part by the LEF Foundation’s Contemporary Work Fund. It also received in-kind support from the Artists Foundation and the artist-volunteers of artSPACE@16. For more information please visit ...............

The 40th Exhibition IN THE NEWS - visit http://www.artSPACEat16.com/archive.htm