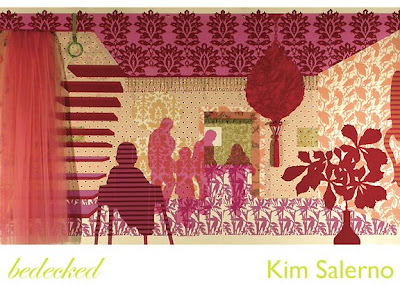 (MALDEN, MA – April 3, 2008) - artSPACE@16 proudly presents its 43rd exhibit - ‘BEDECKED’ by KIM SALERNO, a selection of Salerno's latest large scale, colorful patterned college work, cut paper sculpture, and smaller vividly colored dioramas. the public is cordially invited to a potluck reception that has been scheduled for Saturday May 3, from 2 - 5pm. Salerno will give a talk about her work at 3pm the same day.

On her work, Salerno states, "The work on display at artSPACE@16 is an exploration of decoration and fine art. Shunned from formal inquiry in both contemporary fine art and design practice, decoration is a forgotten carrier of meaning. It is a window into ideas and an avenue of feminist thought. Similarly, women’s contributions to visual culture, particularly decorative work, has been persistently marginalized."

Salerno has worked as an architect and presently serves on the Historic District Commission in Newport, Rhode Island. Besides teaching at the University of Rhode Island, Salerno’s work has been exhibited throughout the United States in galleries, cultural centers and museums. The wall hangings in this exhibit combine patterned, domestic interior and garden imagery. Scenes include garden and architectural elements, decorative objects, and silhouetted figures.

Salerno’s work has won many awards including a recent grant from the Pollock-Krasner Foundation and a fellowship from the Rhode Island State Council on the Arts. The three-dimensional works build on similar themes, blurring distinctions between art and interior design, the work generally draws from a variety of sources such as Indian miniature painting, William Morris Arts and Crafts, Ikea catalogues and popular decorator magazines.

artSPACE@16 has been selected as the "Gallery, north" WINNER in the "BEST OF ART" category in The 2008 BEST OF BOSTON ® HOME edition of Boston Magazine. To learn more about artSPACE@16, please visit http://www.artSPACEat16.com

Related news about the closing...